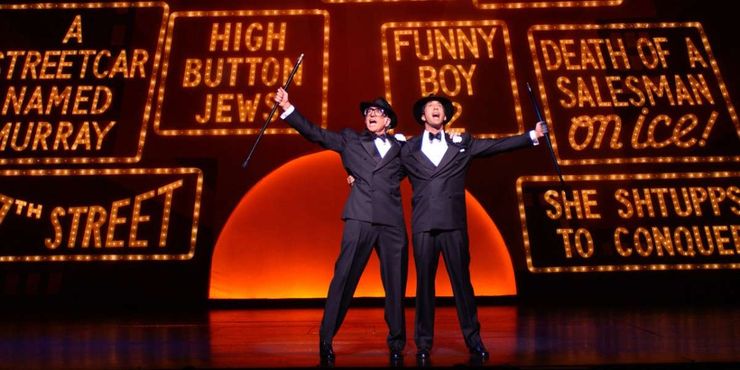 “I spend my life accounting

with figures and such

To what is my life amounting

It figures, not much

I have a secret desire

Hiding deep in my soul

It sets my heart afire

To see me in this role

I want to be a producer

With a hit show on Broadway”

There would be no new Broadway shows without them, so today we turn our attention to those worthy to go above the title for our latest roundup of Social Media Accounts Every TheaterMaker MUST follow. Check out the 15 Producers we’ve got our eyes on as Broadway gears up for its big return by clicking the links below!

Jennifer Ashley Tepper produced Be More Chill on Broadway and also serves as the Creative and Programming Director at Feinstein’s/54 Below, but we came to know her as the author of The Untold Stories of Broadway book series. Featuring behind-the-scenes Broadway shenanigans, from the longest-running poker game on Broadway to the little-known history of Studio 54 to the time Ethel Merman saved Anita Gillette’s job on “Gypsy,” the book also shares tales Tepper has heard from interviewees including Hal Prince, Laura Linney, Terrence McNally, Kenny Leon, Lin-Manuel Miranda and more.

Pictured here with Marvelous Mrs. Maisel Rachel Brosnahan, Sussman co-produced Heidi Schreck’s Pulitzer Prize finalist and Tony Award-nominated play, What the Constitution Means to Me. For all you TheaterMakers in the Great Lakes region, Sussman is also the co-founder of The MITTEN Lab, an emerging theatre artist residency program in her native state of Michigan.

After declaring himself “ready to risk arrest” and open for full-capacity audiences without the government’s go-ahead, Lloyd Webber announced the cancellation of the opening night for his new musical Cinderella just hours before it was due to welcome the press and its first full-capacity audience. The move came after the testing system at the Gillian Lynne theatre in London’s West End identified a member of the cast in a small role who had Covid.

The recipient of the Ninth Annual Broadway Global Producer of the Year Award from Broadway Global, Moreland will bring Thoughts of a Colored Man to Broadway this fall under the direction of Steve Broadnax III. Also in the works is the Phylicia Rashad-helmed Blue and American Buffalo with Laurence Fishburne, Sam Rockwell, and Darren Criss.

Diana DiMenna is an award-winning theater and film producer as well as philanthropist. Her Broadway credits include What the Constitution Means to Me, Girl From the North Country, Network, Three Tall Women, and Natasha, Pierre, and the Great Comet of 1812. Her shows in development include Stu for Silverton, and Octet. She recently revamped her development company, Plate Spinner Productions by adding fellow “Producers to Follow” Brian Moreland and Rachel Sussman.

Simons has over two decades of experience, five nominations and four Tony Awards to his credit — more than any other African-American Broadway producer in history. The president and CEO of SimonSays Entertainment, Simons has been a pioneering force in bringing diversity to the stage and behind the scenes, and in leading the effort to tell stories of African-American history, culture and experience. All eyes are on his Thoughts of a Colored Man, coming to Broadway this fall.

Ben is a New York City-based producer and content creator currently producing the new musical Gun & Powder, which had its world premiere at the Signature Theatre. He also recently co-produced Be More Chill both on and off-Broadway. A close associate to Hal Prince, Holtzman worked on Prince of Broadway at Manhattan Theatre Club. Ben also worked with Hal on writing his memoir, ‘Sense of Occasion’ and produced the memorial celebration for Prince at the Majestic Theatre directed by Susan Stroman.

Can’t wait to catch Sarah Jessica Parker and Matthew Broderick in the Broadway revival of Neil Simon’s Plaza Suite? Well, you can thank producer Hal Luftig for bringing the married superstars back to Broadway. The winner of four Tony Awards and two Olivier Awards, Luftig has worked on and off-Broadway for the past 35 years. Other Broadway shows include American Utopia, Kinky Boots, Children of a Lesser God, Legally Blonde, Thoroughly Modern Millie, Annie Get Your Gun, The Diary of Anne Frank, and Angels in America. Easy to see why Sardi’s added him to its Wall of Fame!

The Emmy-winning filmmaker’s new documentary with director Sammi Cannold, The Show Must Go On, will make its premiere at Broadway’s Majestic Theatre in a one-night-only fundraiser benefiting The Actors Fund August 9. The documentary follows the companies of two productions in South Korea—the world tour of The Phantom of the Opera and the South Korean tour of Cats—as they pushed forward safely during the pandemic when the rest of the industry had shut down worldwide.

Alia Jones-Harvey is the only woman of color currently working as a lead producer on Broadway. Her company Front Row productions began with the revival of Cat on a Hot Tin Roof in 2008, continued with A Streetcar Named Desire, was involved with The Trip to Bountiful, and most recently with Eclipsed, which was nominated for 6 Tony Awards including Best Play. Harvey also teaches a course entitled “Producing for Broadway” at the City College School of Continuing and Professional Studies.

Harry Potter fans have Sonia Friedman to thank for bringing the boy wizard to the Broadway stage. Since 1990, Sonia Friedman Productions has developed, initiated, and produced over 160 new productions, and together they have won a staggering 58 Olivier Awards including a record-breaking 14 at the 2014 Awards. Harry Potter and the Cursed Child won 9 Olivier Awards, the most awards ever received by a single production in Oliviers’ history. Her company has also won 30 Tonys and 2 BAFTAs.

The stage veteran seen on Broadway in the hit musicals Ain’t Too Proud, Beautiful: The Carole King Musical, The Scottsboro Boys, A Chorus Line, and more will make the move to Producer by bringing his former Beautiful castmate Douglas Lyons’ Chicken & Biscuits to Broadway this fall.

Though he needs no introduction, Jordan Roth is a multi-faceted creator, tastemaker, and thought-leader across the worlds of theater and fashion. As a producer, Roth has won four Tony Awards for Kinky Boots, Clybourne Park, Hair, and Angels in America. The President of Jujamcyn Theaters, Roth oversees five Broadway theatres! Click that follow button for an endless array of theater, fashion, and fabulousness!

No producer list will be complete without the legendary Irene Gandy. Irene Gandy has worked on Broadway for over 50 years. She started out as a press intern with the Negro Ensemble Company in the 1960s and then worked on over 40 shows as a press agent, eventually becoming a producer in 2012 with the Tony-winning Porgy and Bess revival and again with Lady Day at Emerson’s Bar and Grill in 2014. Ever the fashionista, Gandy also has a line of furs with Mr. Pete.

Want to connect with Producers? Join our TheaterMakers Facebook Group with over 1,400 theatermakers including producers!